“The smallest feline is a masterpiece,” Leonardo da Vinci

Today, cats are one of the most popular pets that have become the primary subject of artists and photographers around the world. What’s the basis? The number of likes and shares of a cat art photo on social media and art platforms,  and how many people love to shop for cat arts. Are you a cat lover and an art enthusiast? Here are some facts that you should know about cats in arts! In ancient Egyptian history, cats are revered and feared during that time for they had feline goddesses such as Bastet and Mafdet. If one injures or kills a cat, severe punishment is given to the person held responsible. Moreover, these feline cats have small sculptures and paintings dedicated to them because most of Egyptian art is related to religion. In the city of Bubastis –known for its greatest temple –thousands of small cat sculptures and mummified cats have been recovered.

How about in Asia? Cats are found in Chinese, Korean, and Japanese arts. They are typically depicted as pampered pets, hunters, ghosts, monsters and spirits by Asian artists.

Cats Suggested As The Fifty-three Stations of the Tōkaidō, (1850), woodblock print Meanwhile, cats in Chinese art are favored by Chinese painters and calligraphy artists for their rounded and contour bodies.

Korean painter Byeon Sang-byeok was known for his detailed brushwork and affections for animals, and an example is his work Myojakdo (Paintings of Cats and Sparrows).

If you have watched films or seen arts with witches and their familiar cats, some of you must have thought that it is cool or you admired it. Sadly, some of the people in the past had a negative opinion of cats. During the early 1800s in France, these adorable and innocent cats suffered due to an assumption that they are a part of witchcraft and are a demonic symbolism. Later on, it ended and cats became the favorite subjects of artists in the 19th-century. An example is Théophile-Alexandre Steinlen’s prominent cat poster Lait Pur Stérilisé (found below). Another French artist whose work of art centers on a cat is Berthe Morisot. Her art piece Fillette au Chat shows a drawing of her daughter affectionately carrying a kitten. Do you agree that cats are great, mighty hunters? Here is a fact: This trait is highly regarded by some societies or cultures from the past up to the present. An example is an art of a cat capturing a partridge in the well known Pompeian Casa Del Fauno (House of the Faun) mosaic circa 2 B.C.E. In the 20th century, modern art forms had recurrent cat arts. Why? Most artists were inspired and connected to the cat’s solitude, tranquility, and elegance. One artist who was known to adore and love his furry muse –allowing to accompany him during his creative process –was Henri Matiss. His art piece of his daughter and cat can be seen below. Matisse’ Marguerite with a Black Cat, 1910

At present, cats are still one of the favored subjects of artists. Moreover, with the emergence of new art forms, artists are able to bring these felines closer to people. Some museums and programs have interactive art that features live rescued cats ready to be brought home to a family. Through art, cats are appreciated and it also becomes an opportunity to encourage others to adopt.

What are your thoughts to our fun facts? Would you like to add an information? We would love to hear from you in the comment box below.

Also in Art Your Cat Blog

6 Tips to Introduce Cats to Each Other

5 Fun, Interactive Games to Play at Home with your Cat

Sign up for HOT MILK DEALS and inside info..

Let customers speak for us

The leggings are very very comfortable and have the right amount of stretch where you need it w/o being baggy elsewhere. The wide waistband makes it super comfy and easy to pull up. I'm a 2x and they fit perfectly (True to Size). They do run a tad long but you can tuck them in socks or boots if it bothers you, it doesn't me. This is a classic piece of clothing and everyone asks me where I get it and how did "My Cats" faces get on there. 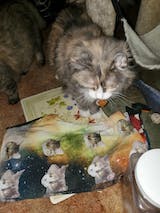 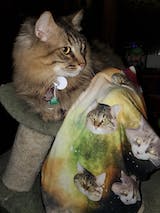 Love this art. Mr Kitty passed away unexpectedly in May and this seemed like a
fitting way to remember him. They do a great job of integrating your photo into the art. I still miss him and looking at this print makes me feel better. 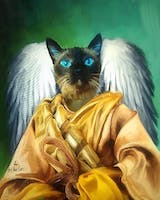 Absolutely in love with all of their products! I have now ordered 10 total and they have been amazing on terms of quality. Their customer service is great too when I had an issue they were more than helpful! I can't say enough good things. 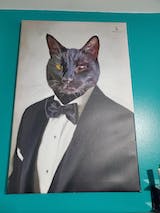 My son moved out and had to leave his cat back home with us. I got him his very own cat hoodie so he could have his buddy wherever he went. It turned out even better than we thought and he was so pleased. 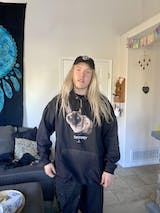 J
The Astronaut - Custom (Your Pet) Portrait J.
Absolutely out of this world.

I am absolutely in love. Everyone that sees my portrait of my little astronaut can't help but laugh and smile. It's so well done! 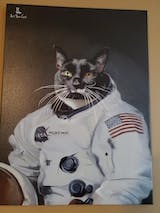 My friend loved it, and her cat loved it to 😄 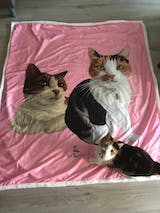 Thank you and your friend! We are happy once again to serve you, dear Petra :)

E
The Astronaut - Custom (Your Pet) Portrait E.F.
Astro Kitty is the best purchase of 2022

Many many thanks to the Art Your Cat artists for accommodating some back and forth adjustments. The final product is awesome -- it is prominently displayed and have already brought lots of laughs (maybe not from the cat haha). Easily going to be the best purchase of 2022! 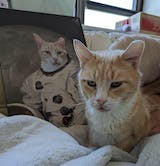 Portrait of Trixie came out better than I could have ever imagined! Looks realistic and is the talking point of the house! Awesome job Art Your Cat team! 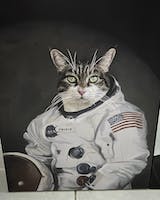 Sign up for HOT MILK DEALS and inside info..